I like to run. I've learned that it really isn't about where you're going, it's about the getting there - the how, the why, the who with. This blog is just a little repository for my thoughts along the way; the setbacks, the lessons learned, and the occasional triumph.

My running – the habit I depended on, the habit that I looked forward to, the habit that defined me for a length of years ("what? you’ve run how many marathons?”) had taken a terrible dive.

I can’t point to one reason why. Maybe I was just too busy working.  Maybe New York City had proven to be not the greatest (or easiest) place to go out for a run.  Maybe it’s because my career had picked up and where one part of my life thrived, another suffered.  Maybe it was the chore of making my dog, Lyla, run with me (the obligation of it was a damper on my sense of spontaneity).  Maybe – maybe – I was just burned out. 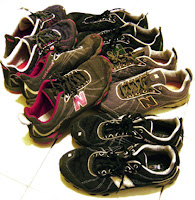 Most likely, it was some or all of those things, but – and here’s a deep, dark confession – the truth is, I don’t love to run.  It’s far too easy for me to decide that I can take a day off.  It’s even easier to opt out of a run the following day.  And the third idle day? Barely a thought. Suddenly it’s been two weeks, and I’ve not even taken a sidelong glance at the bright orange Asics in the corner of the room under my desk.  Procrastination is a specialty of mine, and even though - and this is another, completely truthful confession - I really do love to run, what I really do hate is getting up off my ass to go out for one.

So, without a routine, without a schedule to answer to, I often don’t.  I sit.  And days go by without a proper run.

For years, I managed my procrastination problem with the motivation of a race.  A marathon looming in the coming months is a good motivator.  But my re-emerging career has made it hard to follow through on my race commitments.  The schedule limitations of being a working actor are a nice problem to have, but they can still be a problem. When I know in the back of my head that I’m probably not going to be running that upcoming marathon anyway, it’s an awful lot easier to just not go out for a run that day.

I needed something else.  A different commitment.  A shake-up.  A new goal.  Something that wasn’t built toward a race.  I needed a new routine.

So, I started a streak.

Streaking (no, not that kind of streaking) is a rather unofficial event.  Based entirely on the honor system, a running streak is accomplished simply by running at least one full mile within each consecutive calendar day.  That’s it. Simple, right?

I considered trying one on a number of occasions in the last few years, but it proved harder to stick with than I expected.  There were too many distractions.  Too many available excuses not to go out for a run.  My procrastination, among other things, kept winning out.

This fall I saw an opportunity to change that.  I’ve had several out-of-town acting gigs in the past two years.  Finally on this go-round, I took advantage of the slightly isolated living arrangements.  On Friday, September 25th, I went out for a 3+ mile run.  The next day, I did the same.  Again on Sunday.  Somewhere on the next day’s run, I decided to try to run every day for a week.  The week-long goal turned into 10 days.  That goal stretched to 25, then to run every day for a month.

I’d always built in off-days in my running routines.  Never a “natural” runner, I simply didn’t believe my body was capable of running every day.  Five days a week was usually my absolute maximum.  However, I also considered anything less than 4-miles to be a worthless training run.  Even at four miles a pop, total mileage can build up quickly.  Running with my dog, Lyla, had slowly altered my perception of a short run, because even going out for 20 minutes with her was worthwhile (and necessary) to help her burn off some canine energy.  I just didn't think of that being a worthy distance for me to run alone, yet.

The generous rules of a running streak, though, made those shorter runs easier for me to accept.  A mile is an easy distance to cover; It takes less than 10 minutes, and that's the baseline for a streak.  Two miles is nearly as easy, and that minimal requirement has been crucial to keeping me going everyday.  The rules of the streak have nothing to do with how fast you run.  If I happen to be feeling really rough someday, a gentle, 10-minute, 1-mile jog is simple to put away.  I can get it done, log it in the book (well, spreadsheet, actually), and move on to the next day, hoping I’m feeling better then.

Somewhat ironically (for me, at least), that daily obligation has had a freeing effect.  I’m KNOW I’m going to go for a run, so I might as well plan it into my day somehow and make sure it happens.  On busy or weary days, I go for a short, easy run.  On stronger days when I have more time, I do a longer one.  But either way, I’m getting that run in.

Today I ran for the 100th day in a row.  I’d have to do a thorough check of my running log, but I believe the longest streak I ever had in 12 years as a regular runner was 7 days.  I’m not doing a great number of miles, mind you.  I’ve averaged only 20 to 22 miles a week during the streak, and my longest single run was 8 miles.  Compare that to past marathon training weeks when I had built up my mileage to 50 a week, and my long runs were between 16 and 20 miles each. So, while my current mileage doesn’t feel “easy”, it also hasn’t felt “hard”, and the important thing – the vital thing – is that I’ve built myself a new routine.  One that isn’t dependent on races.  One that I can’t put off until tomorrow, or next week.  One that keeps me going every single day.

There were sometimes that it was tricky to make my run.  I awoke in the wee hours of October 23rd with a severe cramp in my glutes.  I could barely walk down the hall to the bathroom.  By that night it had loosened enough to jog a mile.  On November 3rd I had a pretty bad head cold, but I bundled up and squeezed in a mile+.  On December 20th, I spent nearly the whole day driving a moving van between Pittsburgh and Philadelphia, but I ran my mile while pushing my bicycle down the sidewalk after returning the rental on the south side of Philly to maintain the streak.  There were a couple other nights when I didn't make my run until the half hour before midnight, but I got it in every day.

In case you’re wondering, I believe one of the longest reported running streaks is being maintained by a man in Hyde, England named Ron Hill.  He began his streak on December 21st, 1964.  He’s runat least a mile every day since for 51 years.  There are a plethora of other folks out there who have streaks lasting 5, 10, 25 years and longer.  There’s even an amazing fellow in Miami who has run not one, but EIGHT miles every day for40 years.  (And his efforts have been recorded in recent years by a talented photographer that I am internet-acquaintedwith.) I don’t know if I have that in me, but who knows.  100 days seems incredibly modest compared to those extraordinary feats.  But it’s my journey, and at least I’m back on it again.

In the meantime, the streak continues. I'll let you know it I get to 200 days, or a full year.  Maybe I’ll even run a marathon again sometime soon, too.  We’ll see what the calendar brings…
Posted by GTI at 9:40 PM

Quick-Links To My Blog 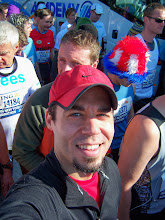